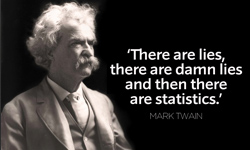 This saying is often attributed to one of my favorite authors, Samuel Clemens (Mark Twain). While he did popularize it, he is almost certainly not the first person to express the sentiment, if not in those exact words. I reference this quote any time the accuracy of one of my reports is called into question. The counter to this is, “The numbers don’t lie.” Which may be true, but I would add… While numbers might not have the capacity to lie, they do have the ability to tell the truth about something which remains entirely irrelevant to the conversation, while seeming to be of the contrary. I use this quote mostly to remind myself of the importance of the accuracy of information I’m presenting. Hopefully, I’m reporting on something important. And if it’s important, important people might be making big decisions based upon it. If all that is true, lots of money and careers could be at stake. (Not the least of which might be mine!) To me, my professional responsibility is to remain unbiased, and avoid just telling the story you know management wants to hear. Truth without correlation, or with distorted causation is one of those statistics we need to avoid.