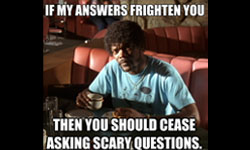 This is one of my favorites, I probably use it more than any other. Many times during the UAT process, or later, I will see a “bug” reported. Not because we have applied an incorrect formula, or even because of an error in the source data. The “bug” is that the user does not like the results of the report and believes that I need to “fix the report” to something more to their liking. I’m not talking about the color palette of a chart, I’m referring to the possibility that profits aren’t quite as rosy as the sales department might have believed. Depending on exactly how sassy I’m feeling that day, I’ll say something like this quote, or refer them to a different application called Photo Shop, to better suit their reporting needs. The fact is, you can either ask me a question or tell me the answer. You can’t do both. Anything to the contrary invokes visions of royalty, disrobed.