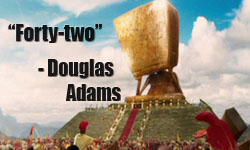 
In Douglas Adams’ book series, “The Hitchhiker’s Guide to the Galaxy”, he tells the story of a group of alien beings that were searching for the ultimate answer to “Life, the universe and everything”. The alien’s spend a tremendous amount of time creating a computer called Deep Thought to help them find the answer. Deep Thought then spends in excess of 7 million years calculating the answer. At the designated time the aliens return to him to learn the answer. Deep Thought asks if they are sure they want to know the answer, because he is fairly sure they won’t like it. The aliens chosen to receive the answer explain that they have been trained and are prepared in the event that the answer is bad news. At last, Deep Thought tells them that the answer is Forty-Two. This is a similar story line to traditional Business Intelligence projects. A fantastic amount of time is spent on building, buying and developing a system to provide reporting solutions. In the end, everyone is disappointed because as it turns out, no one bothered to sort out what the question they were trying to answer was or considered the possibility that by the time the answer was found it might not be relevant any longer. In the books, the aliens use Deep Thought to build a better computer to calculate the question. This of course also fails after an additionally ridiculous amount of time. Finally they decide on…Nah, I should let you find out for yourself, it’s a brilliant series that deserves better than my re-telling.